It is always lovely going to conferences in Europe, well I’ve mostly been in Scandinavia, so it was pretty sweet when I got the option of speaking at Techorama in Belgium. A conference that I had heard good things of, but I hadn’t had the option of going before (mostly due to scheduling since it’s quite cheap).

The initial talk is was planning to do was an iterated version of my “OSS creates heroes” talk, which I first did at BuildStuffLt. The talk is way more about motivation, mastery and being curious than it is about open source software, but it is quite a good talk I am trying to do again somewhere. Not so long after I had been accepted I got a “hey, is it possible that you can do another topic since it looks like we have a double”. I am actually quite pleased that they reached out to me and asked me, instead of letting two talks be quite equal. When I asked for what categories they were missing content I found myself thinking that Internet of Things would be a fun thing to do. On one hand I have been doing some hardware things over the last year or two but I hadn’t ventured into the whole IoT area. For me this was a flashback to how I entered the speaker scene, committing to a topic I had no current knowledge of but only a certain degree of interest. I am not certain it’s the best way to go for many, but for me it seems like an awesome challenge when I have enough time to prepare (usually that would be 2+ months). It is enough time to dig into a topic for me to feel confident that I am actually not just telling a bunch of lies and stories on stage. IoT is such a fluffy and big topic that I was certain that I could come up with something that was missing.

The talk I ended up presenting was “Internet of Things: a road to success or absolute failure” which was a more softie talk about the whole IoT topic. So far I have seen many people fiddling with small pieces of hardware and doing talks only on that specific piece of hardware. One thing if am missing is the why and how in those talks. It doesn’t matter how well you can implement something with whatever device you like if you can’t put it into a usable context. I wanted to paint a broader picture of what IoT can do for all of us, how it can make the world better and not to forget…what silly things we shouldn’t do. I don’t really care if you are trying to save the world or just trying to make money by doing IoT, but I do want devices that add something usable to this world.

The few guidelines I have for devices is that they shouldn’t be intrusive on my everyday life, you got to have a really good security story around your device as I don’t want a backdoor to my private network. Last but not least I want to have a completely clear explanation of my privacy in the context of your device. I don’t mind that you might be selling my data, but I do want to know so that I might not select your device due to it. 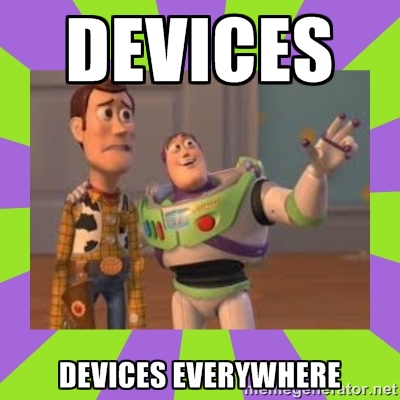 Looking back at the session I think it went quite well since it was a first run at a conference, somehow I tend to stumble a bit on my words no matter how many times I practice my talks beforehand. It wasn’t a packed room or anything like it but I am happy with those who turned up…guessing something like 20-40 people (memory is a bit far away with the very late blogpost).

I regard to the double booking on topic I am pretty convinced that it was due to Jeff Blankenburgs session “We have too much time” that I was asked to do something else. There were some parts of the talk that would have been an overlap with my motivation talk, so I am ok with my talk not being there.

Overall I would say it was an awesome conference. As a speaker I can just give a big thumbs up, there were no time I was in doubt about anything. The flight was planned quite fast, the hotel was already sorted out before I thought about it. The staff was on top of everything and there was not a moment where I was in doubt about anything. The night before the conference we were even taken good care of with a partner/networking event. Good beer and some light food walking hand in hand with meeting the other speakers and some of the sponsors/partners.

Looking at the faces of the people attending the conference as a regular attendee I would say that it looked like a good place to be. In regard of the other sessions than mine it looked like a good mix to inspire many thoughts for future projects for people. If you have the time for it your should go in 2016, at least I hope to be back.

© cyberzeddk - opinions with a slight chance of snow. Design: HTML5 UP. Ported by Julio Pescador. Powered by Hugo